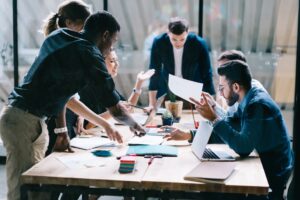 Migrants are persons who do not have German citizenship or have not had it since birth. At the same time, someone is considered to have a migrant background if they or at least one parent was born without German citizenship.

The number of startups started by people with immigration backgrounds in Germany has increased dramatically, with a quarter of all four startups founded last year by people with an immigrant background, according to a new study by KfW Bank.

Last year, 605,000 startups were registered in Germany – and in around 160,000 cases, the founders had a migration background.

The proportion increased significantly by five percentage points to 26 percent compared to 2018, shows the evaluation of the KfW Start-up Monitor.

BioNTech is a Mainz-based company founded by a couple with Turkish roots that has gained worldwide attention thanks to its coronavirus vaccine.

According to Köhler-Geib, chief economist at KfW, the innovative spirit and growth of migrants holds great opportunities.According to the study, migrants or people with a migration background are also more likely to become self-employed because they often have worse opportunities on the labor market than people without a migration background. So they have a higher willingness to take risks.

Startups are run by young businesses founded more than five years ago. They have a team of founders or employees and are innovation- or growth-oriented. Founders who meet the new challenges with innovative business ideas can be the big winners of tomorrow.

Many start-up projects have been put on hold because of the pandemic. “However, the crisis can also act as a catalyst for innovation,” Köhler-Geib said.