Iran’s export to Turkey; jumping 192% in 3 months on year 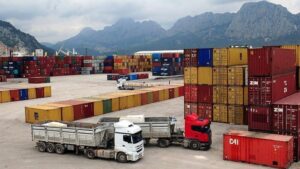 Ruhollah Latifi mentioned that Iran exported commodities worth $1.737 billion to Turkey in the three-month period. The official also put Iran’s three-month import from Turkey at $1.273 billion, with 22 percent increase year on year.

According to official documents, Turkey was Iran’s second trade partner in the first quarter of the present year. In March, a webinar was held on trade relations between Iran and Turkey, which was held through cooperation between Tehran Chamber of Commerce, Industries, Mines and Agriculture (TCCIMA) and Istanbul Chamber of Commerce (ICOC), and accompanied by officials from both chambers and also a group of entrepreneurs, ways to develop economic relations between the two countries and some problems in this due were discussed.

Attended by more than 250 entrepreneurs from Iran and Turkey, this virtual conference examined the opportunities for cooperation between the two countries and the two parties emphasized the development of cooperation.

Having addressed the conference, Nihat Alayoglu, the secretary-general of Istanbul Chamber of Commerce, referring to the political, economic and cultural similarities between Iran and Turkey, clarified: “The two countries have long-standing relations dating back to more than 400 years ago, and more than 500 kilometers of common border, as well as several trade agreements with each other, in particular, the preferential trade agreement, concluded in 2015, is very important for both countries.” It was mentioned that this conference was to pave the way to continue previous agreements.

He added that the value of trade between Iran and Turkey has improved from $1.2 billion in 2001 to about $5.6 billion in 2021. Of this amount, $2.7 billion is devoted to Turkish exports to Iran and $2.8 billion is related to Iran’s exports to Turkey. It should be noted that machinery and equipment are among the top exports of Turkey to Iran, and mainly materials such as copper and plastic are imported from Iran.

Emphasizing that Turkey accounts for seven percent of Iran’s $39-billion imports, he continued: “Our purpose is to improve Turkish exports to Iran to $10 billion, and it is crystal clear that the two countries’ chambers of commerce have a role to play in increasing trade cooperation.”

The secretary-general of Tehran Chamber of Commerce, Bahman Eshqi, for his part put emphasis on the importance of expanding economic ties between Iran and Turkey, and said, “Turkey is one of the gateways of Iran’s economy to Europe, and Iran is one of the gateways connecting Turkey to the Silk Road and the lands of the Commonwealth of Independent States (CIS) members. Iran can also be the main gateway for Turkey to join India and the subcontinent.”