A brief overview of Iranian pistachios and its export 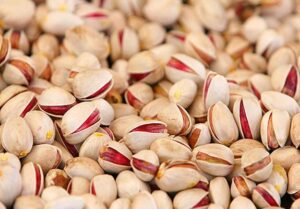 The pistachio tree is a small plant that grows mostly in the Middle East and Central Asia. The growth of this tree has been reported in countries such as Iran, Syria, Turkmenistan and western Afghanistan.

For example, Turkish pistachios are of a different breed. In order to get to know more about Iranian pistachios and how to export them, let us first examine the features of this product. Pistacia vera is found in dense forests in the northeast of Iran. Propagation of Iranian pistachio is done by planting seeds and creating seedlings. Pistachio is a plant that has been cultivated in Iran for a long time. In the past, Iranian pistachios were peeled and dried in the traditional way, but now it is completely mechanized in workshops and factories.

In general, pistachio types are divided into two groups, round and long, which are known as Kole Ghoochi, Hazelnut, and Akbari. But traditionally, about 90 types of pistachios are known in Iran; some of them are widely and commercially cultivated and some are scattered and limited. The most important commercial varieties of Iranian pistachios are:

Although the United States is the largest producer of pistachios in 2022, Iran has become one of the main countries for buying pistachios in the world due to its variety of pistachio production and high quality.